It was a dominating performance by the Westbury boy’s basketball team on Saturday, Feb. 14, as they rolled to a 76-40 victory over Hicksville in the first round of the County playoffs at Westbury High School. The fifth seeded Green Dragons will now face the number four seed Freeport this Thursday in the quarterfinals round. 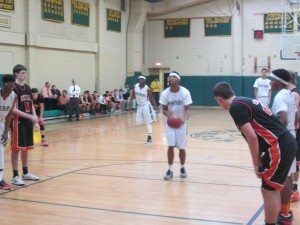 It was obvious from the start of the game that the twelfth seeded Comets were overmatched. Westbury used their stifling defensive pressure to force Hicksville into making difficult passes that were either intercepted or a lost possession. The Dragons jumped out to a 10-0 first quarter lead and it wasn’t until five minutes into the game that that the Comets were able to get their first points. By the end of the first quarter the score was 17-2 in favor of Westbury.

Things looked a little bit brighter for Hicksville in the second quarter as they were able to gather some offensive rebounds and turn them into points. The Green Dragons kept them at bay though by hitting some timely three point shots. Sophomore guard, Johnathan Dean had another great shooting game hitting multiple shots from beyond the three point arc. Dean ended up with a game high 22 points to lead all scorers.

After taking a 32-20 lead into halftime, the Green Dragons looked a little lackadaisical to start the third quarter. The Comets were able to cut the Westbury lead to single digits, 35-27 thanks in large part to the shooting of Connor McPartland, who had 15 points in the game.

Westbury was able to catch fire through the shooting prowess of Dean, Jerome Cunningham and Kyle Spruill. They also locked down on defense and looked like the team that came out of the gates in the first quarter.

The Green Dragons cut off Hicksville’s passes and stole the ball on multiple possessions to go on a 14-0 run to blow the game wide open. A manageable eight point deficit had quickly turned into a commanding 51-30 lead for Hicksville. 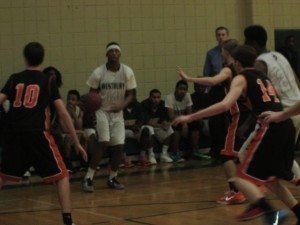 “There was a point there in the third quarter when they cut the lead to eight and we knew we had to turn it up a notch,” said Westbury Coach Dave Graff. “We really ratcheted up our defense and it made a big difference.”

Westbury put the emphasis on their pull away in the fourth quarter adding an additional 25 to the scoreboard en route to a dominating 76-40 win.

Now the road gets tougher for Westbury as they must face Freeport, who has been one of the better teams in the County this season.

“We just need to stick to our game plan and go out there and execute it,” said Graff. “If we do that I think we’ll be ok.”

If the Green Dragons pull off the win at Freeport on Thursday, the number one seeded Elmont team could meet them in the semifinal round.

The quarterfinal game is at Freeport High School on Thursday at 1 p.m.