The word ‘community’ is synonymous with peanut butter and jelly every third Saturday of the month at St. Brigid’s School in Westbury as community members gather for the Peanut Butter Gang (PBG). 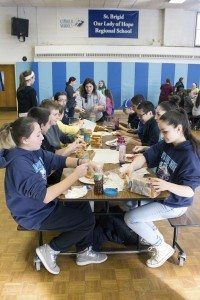 This clever initiative, which began at Hospitality Too Soup Kitchen at St. Anne’s in Brentwood, gathers a community of kids from Westbury and East Meadow to make peanut butter and jelly sandwiches that help feed the hungry all across Long Island. While also helping hundreds of less fortunate folks, the middle-school aged kids obtain hours of community service for their respective Confirmations, and the older teens help the younger kids by demonstrating the proper techniques of creating these sandwiches and sanitizing their stations. Many parents volunteered as well by packaging the sandwiches into Ziploc bags, then packed them in boxes to be delivered to the pantry in Brentwood later that day.

Youth Minister of St. Brigid’s parish, Vince Buzzeo, was on hand to welcome the volunteers as they gathered at 8 a.m., as well as talk about the mission of the PBG, where their sandwiches go and more importantly, that there’s hunger everywhere on Long Island.

After his brief introduction, the kids began to feverishly slap peanut butter and jelly onto bread and operate like a well-oiled machine, churning out 14 sandwiches every minute until 9 a.m.

“Everything gets used, nothing goes to waste and it raises awareness,” Buzzeo said. “We also try to keep everything donated; the peanut butter is donated by the Kiwanis Club of East Meadow and some of the religious education students, and we ask the kids who are attending the PBG to each bring one loaf of bread.” 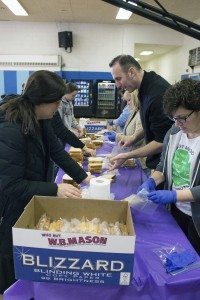 etting parents and kids to volunteer has also become easier with the help of Kristen Campagnuolo, who has been working with Buzzeo and the PBG for three years, and puts out the word every Wednesday before the event, reaching thousands of people between Hicksville, East Meadow, Westbury and farther on Facebook. She also sends out various emails to families, asking for donated goods, like paper crates for carrying sandwiches, and flattened spoons. So far, her reach has produced 25 kids or more to attend each PBG event.

Although attendance was short in the beginning, one family worked with Buzzeo for over ten years with the Peanut Butter Gang. Gina Principato and her mother Rosa have known Buzzeo for a long time, and have been a part of PBG since Gina was in second grade. Now currently a student at Adelphi University, Gina has seen the true growth of the PBG, “At first, there were only seven people here…seeing how much it’s grown, it’s a real community feeling,” says Gina. Together, her and Rosa have made the PBG into a family tradition; Gina talks to the kids about keeping their station clean, while Rosa helps the other parents organize and package the sandwiches.

Buzzeo continuously reminded the kids throughout the hour that this food was going to be meals for people, and that it should be presented properly.

“Some of the sandwiches do come back here, so it’s happening in our own backyard…some people don’t want to see or acknowledge that, but it’s real and it’s happening,” Buzzeo said.

This experience gives its volunteers a reason to give back, not just for people living out east or further west into Nassau, but for people within their own communities. This month’s turnout successfully produced more than 800 sandwiches in the final counts.