The Village of Westbury’s Christmas tree lighting recently helped to bring the community together to remember the true meaning of the holiday season.

On Nov. 29, community members gathered in the Village of Westbury’s Recreation Center for the annual Christmas tree lighting festivities. Attendees enjoyed snacks and refreshments as a five-piece brass band played holiday tunes. Local community leaders gave speeches and toward the end of the ceremony they announced the various winners from the Recreation Center’s after- school art contest. 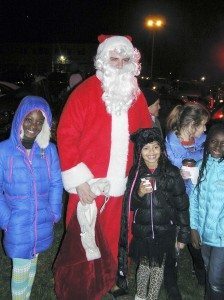 Among the winners was 8-year-old Beck Dodd. He was one of the many winners called to the front of the room to receive a lovely laminated certificate. Winning the contest would have been an exciting achievement for any typical 8-year- old, however Dodd isn’t your average kid.

As Dodd pointed to his winning picture, there was a sparkle in his alluring blue eyes. He commented on his picture, which featured a smiling boy in a brightly colored sweater and said, “it’s just a picture of an American boy who’s happy.” His uncle, Perry Tyner, said that less than one year ago, his nephew had been living in Charlotte, North Carolina. Unfortunately, his mother was unable to care for Dodd and his 12-year-old sister. The state had plans to make the children wards of the state and place them in foster care when Tyner and his wife Georgia made a bid to officially adopt the pair.

One year later, Dodd is full of holiday spunk. He’s thrilled to be part of the community and adds, “I love coming to the recreation center after school. I have so much fun!”

My last question for the youngster was what he enjoyed most about being in Westbury with his uncle. Without a pause, Dodd answered and exclaimed, “It’s the love they give me. That’s my favorite thing about being here with my uncle.” Huge smiles lightened all of our faces and suddenly the minutia of life was lifted as we floated outside, excited to watch the lighting of the tree.

The crowd gathered outside and village mayor Peter Cavallaro flipped the switch the light the tree. Suddenly, a fire truck rolled up and out jumped Santa. Kids ran toward the truck to meet Saint Nick and take pictures with him.