Two Westbury Middle School students got the opportunity of a lifetime recently as they simulated walking on the moon, learned how to land a space shuttle and met friends from around the globe at space camp.

Accompanied by teacher Tim Mueller, eighth graders Shakdy Reynosa Camacho and Josmar Castillo Sandoval traveled to the US Space and Rocket Center in Huntsville, Ala. for the five day camp at the end of July.

Along with other students from around the world, Reynosa and Sandoval learned STEM (science, technology, engineering and math) aspects of space travel and engaged in the same exercises as someone training to become an astronaut. Activities included working in a group to successfully land a space shuttle in a simulator, learning how to right themselves after becoming disoriented and using a simulator to feel what it’s like to walk on the moon.

“My favorite part about camp was being able to do a simulated space mission like a real astronaut,” said Camacho.

“My favorite was when we entered the pool to build a structure in a weightless environment,” said Sandoval.

And while STEM was the emphasis, there were also additional benefits for the students.

“They really got a lot out of it,” said Mueller. “Not only education, but the social aspect too. A lot of our students had never been off Long Island and they met with kids from England and California. The essence was on team work and how you can’t accomplish a goal by yourselves, but you need to work with others from different backgrounds to accomplish your goal.”

Reynosa and Sandoval both said that the experience has inspired them to pursue STEM careers.

“It encouraged me to pursue a career in science because I love science and I would enjoy having a career in it while helping NASA. Or maybe even becoming an astronaut one day,” said Camacho.

The opportunity was open to all district students ages 10-15 and they had to write an essay about why they were interested, what they felt they would get from it, and what intrigued them about aeronautics and space exploration. Several students submitted responses and a committee of teachers and an administrator chose Camacho and Sandoval as the winners because of their strong interest.

“I’ve always been a fan of astronauts and space,” says Camacho. “When I heard of this opportunity, I knew I had to be a part of it.”

“It’s always been my dream to go into space. Right now this is the closest I can get so I wanted to do it,” said Sandoval.

In the future Mueller says he would love more students to go to the camp, but it depends on getting sponsorships to help with airfare and room and board. This year, Northrop Gruman sponsored the trip for the two students.

“I would love to expand the program. It really was a once in a lifetime opportunity. It’s really a treat and the kids had a fantastic time,” Mueller said. 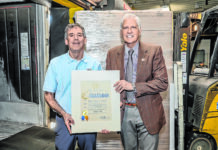