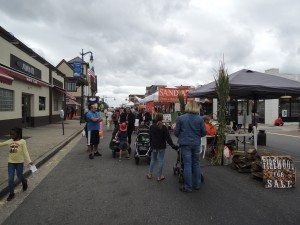 Though rain cut it short, the Westbury BID (Business Improvement District) street fair went on successfully this past Saturday. Kids enjoyed playing on the inflatable obstacle courses and taking pony rides, and fair attendees perused the booths of over 80 vendors selling items such as honey, jewelry and home décor, and services such as swim and dance lessons. There was also plenty of food, including a grilled cheese truck, and live music in the piazza.

Though the fair had to close 90 minutes early due to inclement weather, BID Executive Director Dawn Blinn says that it was a great event.

“We had a good turnout and wonderful entertainment and vendors. We were happy that the rain held off as long as it did. It seemed everyone there had positive things to say about the fair, and all in all we consider it to be a great success,” Blinn said.

One of the newest additions to the street fair was the pop-up gallery, sponsored by the BID and Greater Westbury Council for the Arts. Nine artists displayed their work in the old Westbury Pharmacy building, and some even sold their pieces.

Artist George Burgess from Westbury had some of his paintings displayed and said participating in the gallery encouraged him as an artist.

“It pulled me out, and I got to see all the talent. It causes me to be more creative and expressive. And people want to know what you do. It’s a good event,” said Burgess.

Fellow artist Bill Lardaro also had some of his paintings displayed. “I thought it would be interesting to be in the pop-up gallery. I get to meet my neighbors and meet other artists, it’s a fun thing,” he said.

Vicki Beuno from Westbury came into the gallery as she walked through the fair. “I think it’s wonderful they’re letting local people show their work. It’s a good, free opportunity for them,” she said.

Local mom Claudia Alzate brought her daughter into the gallery. “I like art and my daughter likes to paint, so I wanted to start exposing her to art in smaller areas, before moving onto to bigger areas like museums in the city,” Alzate said.