Fair attendees can enjoy live music in the piazza, a food court and perusing through the booths of over 100 vendors selling crafts, jewelry, handbags and other merchandise. There will also be family friendly attractions such as pony rides, a petting zoo and expanded inflatable kiddie carnival. 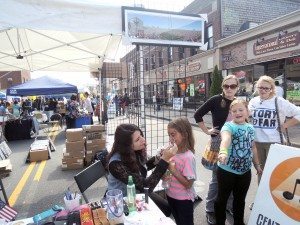 New to the fair this year is the Pop-Up Art Gallery, a joint effort on behalf of the BID and Greater Westbury Council for the Arts. The gallery will be at the vacant 247 Post Ave., which used to be the Westbury Pharmacy. The exhibit opens Friday with a gala from 7 to 10 p.m. and art from the exhibit will be available for purchase on Saturday. Around five to seven artists will show their work.

“We think that’s going to be a really big draw,” said Blinn. “We’re excited that it’s one of the new things we’re adding to the fair.”

Arts Council Second Vice President Alex Nunez says the group decided to do a pop-up gallery because of the success of their last one at Hicks in March.
“It was well received and we noticed there was a need for greater art in our community so we thought this would be a good opportunity to do something like that again,” said Nunez.

The Arts Council is also inviting attendees to stop by Winthrop Street to help create a street chalk mosaic.

Representatives from the Long Island Philharmonic will be set up outside The Space to talk about their upcoming show and the theater will also be open for tours. Last Hope Animal Rescue will be bringing cats and dogs that can be adopted at the event.

The BID is also bringing back the Balloon Bust Raffle, one of last year’s most successful events. Every balloon contains a prize, which includes tickets to shows and concerts, gift certificates to local restaurants, an overnight stay at Viana Hotel and cash prizes. 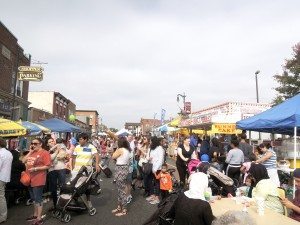 Blinn says that the street fair is a great way to bring exposure to local businesses.

“People who visit will go to places like Café Gino’s and Alfredo’s to eat, and stores can bring their wares to the sidewalk so everyone can see what they have in the stores without having to go in,” Blinn says. “Most local businesses love it.”

Miriam Hernandez has participated in the street fair before with her business, The Hernandez Agency. This year, she’s planning on being at the fair to promote her new lounge, His and Hers.

“It gives you more exposure and lets people know you’re there,” noted Hernandez. “People can walk through and see what you have to offer.”

Blinn hopes that this year’s fair will continue the trend of drawing a crowd, so that everyone can see what’s going on in Westbury.

“We hope we get more and more people to come to the fair from different areas to see what downtown Westbury has to offer. We want to show off our revitalization and the Space and for people to see all we have to offer,” Blinn said.

The festivities take place along Post Ave. from 10 a.m. to 5 p.m. The rain date for the festival is Sunday, Sept. 14.