Joe Palumbo is at it again. The Westbury resident is stepping into the boxing ring for the second time for Long Island Fight For Charity, an annual event that pits local business owners against each other to raise money for several local causes.

“A lot of good and fun moments came out of last year,” said Palumbo. “You get to see the faces of the people you help, which makes it really cool.” 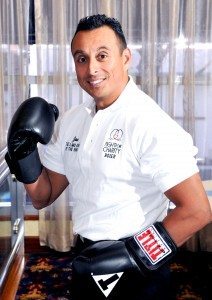 Along with his brother, Palumbo owns Camelot Limos which explains his nickname in the ring: Joe “Limo King of the Ring” Palumbo. He says that not only does the event help his business, but he loves being able to give to those in need.

“From the business standpoint it’s fantastic, you get to meet a lot of new contacts and friends. From the charity standpoint it’s even better. It’s a win-win any way you look at it,” says Palumbo.

Money raised from the fight goes toward Long Island Community Chest, The Genesis School and the National Foundation for Human Potential. Last year, Camelot Limos alone raised $22,000 in ticket sales. Palumbo says a cause like Long Island Community Chest, which provides short term financial assistance, is especially close to his heart and was extra motivation for him to step back into the ring.

“Everyone in life goes through struggles. The difference between someone making it and imploding is that little bit of help, that little push,” Palumbo said. “You get to help real families in real situations and see that money go to good. That little push helps them along and seeing that family get ahead is a real home run and makes you feel so good.”

When he signed up for the fight last year, Palumbo had to make major lifestyle changes such as exercising and adjusting his diet to get in shape. But since the fight last November, Palumbo says he has stayed healthy and maintained his weight at 165 pounds. He started training again at Glen Cove Boxing Gym under the direction of coach Pedro Figeroa in June. His weekly routine includes running six to ten miles, light weights and sparring.

Palumbo won’t know who he’s matched up against until October, but says that no matter who it is he’s going to train hard.

“As long as you’re my weight class, I’ll fight anyone. I train hard. The fight is real, the training is real. There’s no sugarcoating or stage fight. The boxers really go at it in the ring,” he said.

He says that last year while he was extremely nervous at the event, he’s anticipating that it’ll be a little easier this year since he knows what to expect.

“I think I’m going to enjoy the night and fights more because I know what to expect,” Palumbo said. “I’ll be a little calmer, but you don’t take anything for granted so I’m still going to train hard for it.”

Last year, he punched his opponent out in the third round. He’s confident he’ll make that happen again.