Summer is almost over, but there are still a few festivals and fairs to enjoy before the temperatures drop. The Feast of the Assumption is one of them, kicking off Wednesday, Aug. 13 and ending Sunday, Aug. 17.

The feast, which is held every year by the Maria SS. Dell’Assunta Society, is steeped in rich history. It started in 1910, when a group of Italian immigrants who had relocated to Westbury wanted to bring the tradition of honoring saints to America. They decided to have a feast of the assumption, which celebrates Mary’s assumption into heaven.

The statue of Mary has always played a vital role in the feast. At the first feast, the statue was carried on a platform high in the air during the entire route, and people would pay money for the privilege of carrying it. The amount of time they held it was determined by the amount of their donation. As the statue made its way through the streets of Westbury, people would stop to pin money on her as tribute. That tradition still continues today, as the 50-year-old statue is still carried by society members during a procession that goes from St. Brigid’s, up Post Avenue and to the feast grounds.

Dell’Assunta Society president MaryAnn DiGuiseppi’s grandfather was one of the founding members of the society. She says keeping with the feast’s traditions helps her stay connected to Italy and the society’s founders.

“We keep the tradition going for our family. We feel it’s important to remember our ancestors who started this whole thing,” she said. 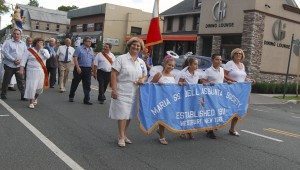 This year’s feast will take place from Aug. 13-17 at the St. Brigid’s Church parking lot on Maple Avenue. It opens nightly at 6 p.m. This year’s schedule includes a Friday evening mass at St. Brigid’s church, which will be followed by the procession to the feast grounds. The festivities also include a dessert baking contest on Thursday at 8 p.m. (a first for the feast), a fireworks show on Saturday at 10 p.m., and an auction on Sunday evening. Like in years prior, attendees can also expect plenty of Italian entertainment, music, games and of course, lots of home cooked food on all four nights.