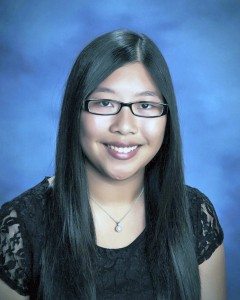 If there’s one thing Carle Place High School valedictorian Francesca Lim has a lot of, it’s ambition. The senior took on nine AP classes, the most rigorous course load the school has to offer. And Lim didn’t just take the classes, but thrived in them.

“Francesca is truly one of the most determined students I have ever taught,” says math teacher Christina Cole. “Whether it be on the math team or in the classroom, where there was rarely a time she did not know an answer, she strived for perfection in everything she pursued.”

“Even more importantly,” Cole adds, “is that her classmates would go to her for her wisdom and she would graciously explain complex topics not just by giving them the answer but by thoroughly understanding the concept and breaking it down for them. She was truly an asset to each of her classes.”

Lim says being named Valedictorian of Carle Place’s largest graduating class to date was a bit of a surprise, and one that she is honored by.

“It’s kind of surreal. I feel great that I’m getting the chance to represent my school and will try to make Carle Place look as good as possible,” says Lim. “I worked hard and with integrity, and I’m glad it paid off. I feel really honored.”

Lim’s talents also go outside the classroom. She’s a member of the school’s Key Club, Mathletes, National, Tri M and Spanish Honor Societies, writes for the school newspaper and has spent hours volunteering. In 2012, she was the recipient of the National Merit Scholarship Award and in 2013, she received the honor of AP Scholar with Honors.

She also played flute in the chamber orchestra, wind ensemble, band and orchestra, an experience she calls “one of the best ever” and hopes to continue in college.

“It was so great getting to meet different people. With so many academic classes you see the same faces but in band you meet a lot of new people you wouldn’t have been able to meet before,” says Lim.

As she heads off to Brown University this fall to major in mathematics, it’s not the accolades or the achievements Lim will remember most about her time at Carle Place; rather it’s the tight knit community of students and teachers.

“The teachers care about you so much. Carle Place is so small you can have that one on one relationship with them, even teachers you never had know who you are,” says Lim. “I’ve been with these kids for over 13 years. I know just about every one of them personally and I’m going to miss that close knit feeling of knowing everyone and everyone knowing you.”

“The entire high school experience was one great memory,” she continues. “It was a lot of hard work, but it was fun. Whether it was homecoming or prom or battle of the classes or group projects, it was all great and I’m definitely going to miss it.” 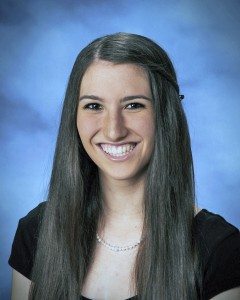 Jillian Mannarino describes herself as “shy and bookish” but it’s hard to imagine that when you see her commanding the stage in one of Carle Place’s theater productions.

“I really like theatre and acting. It’s an outlet for spontaneity where you can do whatever you want and not care about what anyone else is thinking,” says Mannarino.

She was most recently seen playing Bonnie in Anything Goes and Paulette in Legally Blonde, and this Saturday, the Carle Place community will get to see her in a more academic role: the Salutatorian of the Class of 2014.

For Mannarino, the honor is a great way to end a wonderful high school career.

“It feels great to be honored for all the hard work,” says Mannarino. “It makes me feel like everything I’ve done has really meant something. It’s great to leave on this high note.”

Mannarino’s talents go far beyond just theater and academics. She was the writer and editor-in-chief of the school paper and received the Adelphi Quill Award in 2012 for excellence in journalistic writing. She also served as treasurer of the National and Spanish Honor Societies, and was a member of the mock trial team since ninth grade. She has participated in NYSMMA and All County Chorus competitions, and volunteered with the school’s Accreditation for Growth committee.

In the fall, she heads off to Susquehanna University to pursue a creative writing degree in the honors program.

Mannarino says she’s known since second grade that she’s loved writing, but it was just in the past year that she decided to pursue it as a career.

“It’s very cathartic for me. It’s helped me figure out how I was feeling, and what I need to do,” she says. Recently she’s begun exploring creative nonfiction and memoir writing.

“It’s helped me share my stories,” Mannarino says. “You kind of hope you’re interesting and unique so you want to share your story with others and want others to understand what you’re going through so they can learn from your experiences.”

She was recently able to fuse together her love of theater and writing as she wrote a screenplay for her Senior Exploration project. To her delight, Mannarino spent the last month of the school year after AP exams writing a coming-of-age musical with Disney songs.

“I wrote my own modern fairy tale. It’s about two high school foster kids who grow up together and it’s all about realizing how real life is not a fairytale and you have to create your own happy ending because no one can do that for you,” says Mannarino.

As she looks back on her time in high school, she describes graduating and moving on as a “bittersweet” experience.

“It’ll be difficult leaving because I’ve built a whole life here and will have to say bye to it. I’m going to miss friends I’ve made and teachers who know me by name, and being at home,” says Mannarino. “But I’m ready for the transition. I have to go out and do this.”

An Update From The Mayor Of Garden City