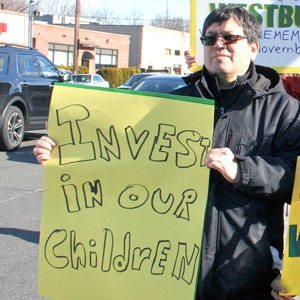 The Westbury School District is ready to fight. The district has taken an aggressive approach to ask for more state aid, going up to Albany to meet with legislators, holding a letter writing campaign and rallying for money they say is vital to meet the needs of the growing student population.

On March 12, Superintendent Mary Lagnado and school board trustees Dr. Pless Dickerson, Karin Campbell and Leslie Davis traveled to the Senate Chambers in Albany to meet with Senator Jack Martins and ask for additional state funds. Dickerson said they received a warm welcome and that the state is “aware of Westbury’s plight.”

“But they’re not going to change the (state aid) formula,” Dickerson said. “Direct bulleted aid is the only way we can get money.”

Last week the Westbury Teacher’s Association (WTA) continued the uphill battle by gathering letters signed by faculty, staff, administrators, students and community members, urging local legislators for additional funding. Over 1,000 high school students signed letters that noted that “the condition of the school is uncomfortable and overcrowded” and that the district was not able to offer as many courses as they used to.

Hundreds of teachers, administrators and community members also signed letters saying that the “need to educate children has become a drain on the district’s resources due to the impact of the tax cap and demanding rigorous academic standards.”

“We need more funding from the state so we can meet the needs of students that is growing by the hundreds annually compared to other districts that have a declining enrollment. Additional funding is necessary to ensure all of our students are college and career ready,” the letter read.

At a March 20 Board of Education meeting, school board members and administrators emphasized the importance of the community making their voice known through the letters.

“The letters all go to say (that legislators need to) stand up for us and get money for us, and get them to understand that we are a special needs district,” said Dickerson.

“The letter writing is going to get us the greatest mileage,” said WTA president Christine Corbett. “There’s a pot of money up there and everybody wants a piece. It seems they’re giving a great deal to the city and we do not get our fair share back on the island. They need to be equitable in their giving.”

Almost 100 members of the WTA, retirees, and administrators rallied in front of Martins’ Garden City office March 21 to show their displeasure for his vote to approve the Senate budget, which makes the tax cap permanent and according to Corbett, takes “public school money away from schools” and gives it to private and charter schools.

“Public schools are already drained. We need to send a message that public schools count and that they need to fund our schools, rather than take the money from public schools and give it to private schools,” said Corbett.

According to Lagnado, enrollment for the Westbury school district has increased 17 percent in the past four years; however, state aid as a percentage of the budget has not, remaining at 28.9 percent or less the past several years. Lagnado calculates that the district should be receiving significantly more from the state based on their combined wealth ratio (which is below the state average at .76 percent) and growing enrollment.

“It’s too much for one community to bear,” said Lagnado. “This is the breaking point.”

As of now, the district is poised to receive $35.56 million in state aid, which is $2.8 million more than last year. The district is asking for more state aid, as well as additional building aid for much needed upgrades to the facilities.

Final state aid numbers for school districts will come out by April 1. Corbett says that community members can still appeal to their legislators by writing letters, sending emails or making phone calls.
The current proposed budget for next year is $123.2 million with a 1.89 percent tax levy.