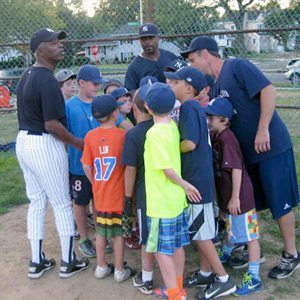 If baseball is dying among the adolescents in the nation, Ray Negron doesn’t want to hear it. Negron, a special assistant to the New York Yankees, is committed to providing young kids the opportunity to excel in the game of baseball through his baseball clinic which is taught by professional players.

“The goal of the clinic is to teach kids to love the game of baseball,” he said. “People forget what’s it’s about. From the era I’m from—which includes Mickey Mantle and Bobby Murcer—learning from them is what it’s about. Teaching that to the kids of today is what it’s about for me,” he added.

The annual clinic began on March 17 and continues the following three weeks through April 7 at Fundamental Sports Training in Westbury. Negron said that it is his “responsibility as an adult to make kids realize how beautiful the game of baseball can be.” He added that“it’s a graceful arm form and parents should teach kids to love the game.”

When asked if the game has lost its luster among children, he responded that “I don’t want to believe that’s the case, but if it is we need to pull them back.”

The most effective way to do that might just be to allow them to have fun and learn from the best. That is what makes the Long Island A-Team clinic a positive experience for the kids. The A-Team, which is now part of the Hank’s Yanks travel team, features instructors that have varying levels of professional experience.

Shamsky said that he “really enjoys doing the clinic”. He added that “it is a great opportunity to develop skills and the structure is excellent”. He likes “talking to kids about past experiences as a pro player. The clinic helps kids develop their skills.”

Yankees All-Star outfielder Carlos Beltran, who is a close friend of Negron, commented on the importance of teaching young kids the right way to play the game. “My life is based upon teaching the kids to play baseball. It’s what helped me as a youngster. I want to return the favor by helping kids of the United States and Puerto Rico,” he added.

Judging by the testimonials, Negron’s clinic is a must-do for children who have any interest in playing competitive baseball. To sign up for the clinic, please call 516-418-7567.