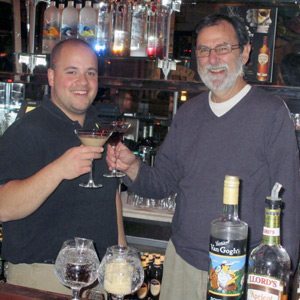 Shakespeare…Hemmingway…Dostoyevsky…Dickens…Dobrin. Dobrin? How did Arthur Dobrin fall in with this crowd?

As it turns out, Dobrin and these writers all have martinis named for them at The Library Cafe in Farmingdale. Westbury’s Arthur Dobrin is the author of a book of short stories called The Harder Right and the restaurant has created a special cocktail in his name, combining the flavors he loves most: chocolate, coffee and apricot.

Disclaimer: The name Dobrin of the cocktail and Dobrin the writer of this article is not a coincidence. I am married to Arthur Dobrin. In the name of objectivity, this piece should probably have been written by someone else, but since I’m the food writer here at The Westbury Times, this is my article.

It all came about when Arthur and I were dining at The Library Cafe and we read their clever list of martinis such as William Shakespeare’s Romeo and Juliet (a combination of Absolut Pears Vodka, Cointreau, Pear Puree and simple syrup) and Dante’s Inferno (made with Crop Organic Tomato Vodka, a touch of Bloody Mary, dusted with Cajun spice).

We noticed a Nelson Demille cocktail on this list (tequila, cointreau, with a splash of sour topped with Grand Marnier Cordon Rouge).Why not another Long Islander?, one of us asked (I’m sure it was me).

We sent over a copy of the book; Mike’s wife Julie read it and said she liked it. We had received the seal of approval.

The staff developed the drink, combining three ounces apricot liqueur, one ounce crème de cacao, and one ounce double espresso vodka, plus a splash of heavy cream. They added cream to cut it a bit for less of a bite.

The new drink was inaugurated and Arthur was there to imbibe the first glass and I was there to take pictures. (His was made without the cream because he’s lactose intolerant.) They even let him behind the bar to shake the shaker.

Dobrin thanked all who had a part in the cocktail and wished them luck, hoping they sell more drinks than he has sold books.