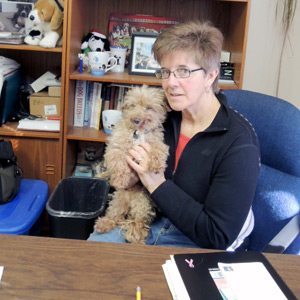 For Susan Hassett it wasn’t over until the last dog barked.

That day was Feb. 27, when she closed the door on the Town of North Hempstead Animal Shelter for the last time as its director.

It has been a long run for Hassett, 56. She started working at the shelter, which is tucked at the end of a winding avenue in Port Washington, 36 years ago and has been its director for the last 25.

But now it is time to go; it’s just too difficult to stay. “Emotionally, it’s very, very hard,” Hassett said. “I need to find some peace.” A successor has not yet been named.

It’s not a single incident, or even a dozen, that made up Hassett’s mind. It is the never-ending callousness she comes into contact with. People give up their dogs because they are moving, or their child has grown bored with it, or they no longer like its color. Dogs are given to the shelter because they have grown old, have health problems or just don’t fit their owners’ lifestyle anymore.

But there are also tears of joy, when dogs that have been at the shelter for a couple of years finally get adopted, or someone takes a dog that is well along in years.

“Those are the good days,” Hassett said.

Still, even these times take a toll because it’s hard to go from highs to lows and back again on a constant basis.

So Hassett is calling it a day; getting ready to pack up her office full of doggy memorabilia (the shelter does not have cats) and take a retreat.

But what a job she has done in her 36 years at the shelter, starting out as a cage cleaner and working her way up.

“Sue has served the town with incredible distinction and passion,” said North Hempstead Town Supervisor Judi Bosworth. “She has always put the health and welfare of the animals first and has gone above and beyond in fulfilling the mission of the North Hempstead Animal Shelter. During her career, she oversaw the expansion of the shelter, and the construction of a brand new ‘Paws to Remember’ patio, both of which have enhanced the overall experience at the shelter for residents.”

When Hassett arrived in 1978 the shelter took in 2,500 dogs a year, and a good deal of them were euthanized. Now, about 400 dogs are taken in annually and a euthanization is rare.

Hassett credits the community and the shelter’s outreach, as well as its programs, for the dramatic fall in numbers.

“People used to let their dogs run freely and they were picked up and brought here,” Hassett said. “Or, they just didn’t care enough about their dogs.”

Now, “people are much more aware of how to properly take care of their dogs,” Hassett said.

“If everyone took care of their pet, we wouldn’t have to be here,” Hassett said.

Dogs that are at the shelter get very good treatment. There are staff and volunteers who spend time with them. The shelter has indoor and outdoor runs and no matter what the breed, all dogs are treated equally. That even goes for pit bulls, which make up about half of the shelter’s dog population. Hassett attributes the abundance of pit bulls to their “exploitation” and reputation as fighting dogs.

She strongly believes it is people, not the breed, that are at fault when the animals become unruly. Indeed, a walk through the shelter found pit bulls laying on their backs waiting to be petted and eager to give happy licks.

Hassett has adopted about 16 dogs from the shelter over the years and currently has six, along with one cat. Her office is lined with photos of many of these adoptees, which, in many cases, appeared to be on their last legs when she took them, but then rallied.

Hassett says the shelter is an ideal place for getting a new companion. All dogs that are adopted have been checked by a vet, spayed or neutered, checked for heart worm, licensed and microchipped for easier identification if they are lost. The shelter’s address is 75 Marino Ave. Hassett said even if one is not looking for a dog, he or she can still help out by volunteering or making a donation.

As for future plans, Hassett will step up another one of her passions: gardening.

And it’s hard to make a total break from something she has done for over half her life. That’s why Hassett may keep a hand in by volunteering at the shelter.